What Do You Get When You Crossover A Duck With A Squirrel?

What Do You Get When You Crossover A Duck With A

By: Agent Darryl, We Got The Geek 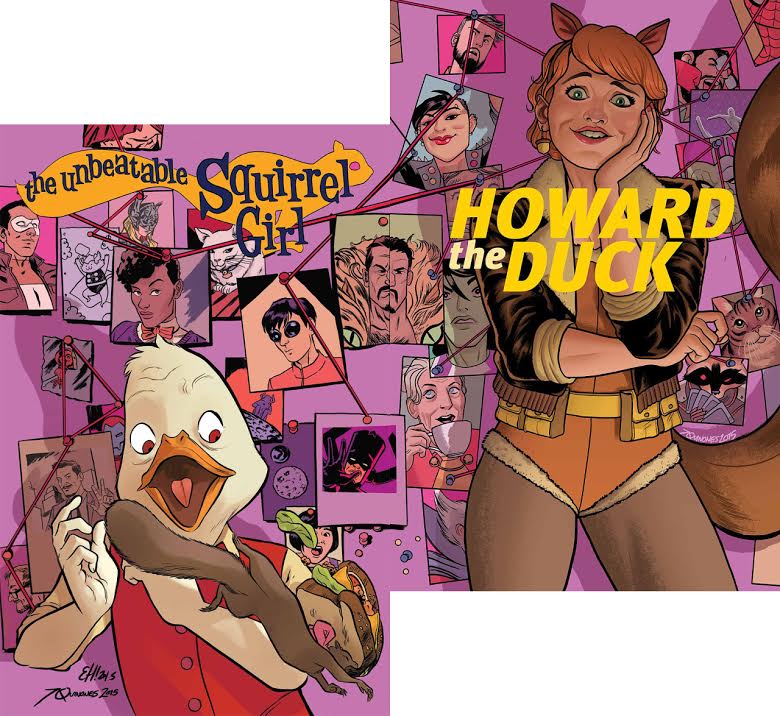 It started out simply enough, as every fantasy comic-book hero crossover does:

Who’d win in a fight?

In this case, the question was posed last year in the letters page of the very first

Zdarsky. The contenders in this battle? Squirrel Girl’s staunch ally and best

his continuing existence on a constant basis. 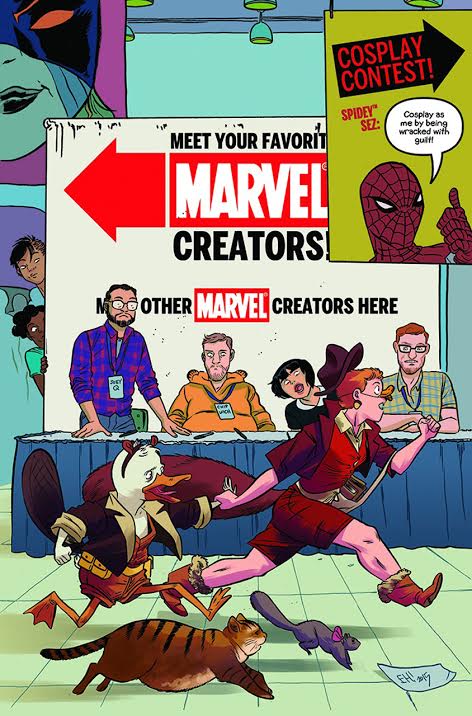 Q: Who would win in a fight, Tippy-Toe the Squirrel or

the mid-80s, scripted by none other than Chip Zdarsky himself. At the time,

though, Chip wasn’t certain his stint on the title would last long enough to see this

fantasy animal scrap come to fruition. While promoting the first issue of Howard

in the spring of 2015, he shared the early details of the dream crossover between

water fowl and tree rodent. “I’ve been talking to Ryan North [the writer of The

Unbeatable Squirrel Girl], whose one of my best friends. We’ve known each other

for years and so, it’s funny that we both ended up in this situation where we’re

comic? How did that happen!?’ But then, we get together for lunch and talk and

friends with [Erica Henderson] the artist on his book. So Joe emailed me, ‘You

know, I’m really good friends with Erica and we’d love to do some sort of

about it all the time! It’s crazy!’

So there it was, two writers and two artists on two different Marvel titles

conspiring to bring two of the most off-beat, unusual and diametrically opposed

now. But not only were they planning on simply connecting stories between the

two titles, it turns out the lines of destiny between these two kooky characters

and their creative teams would reach much deeper than that.

writing the duck comic? How did that happen!?’ 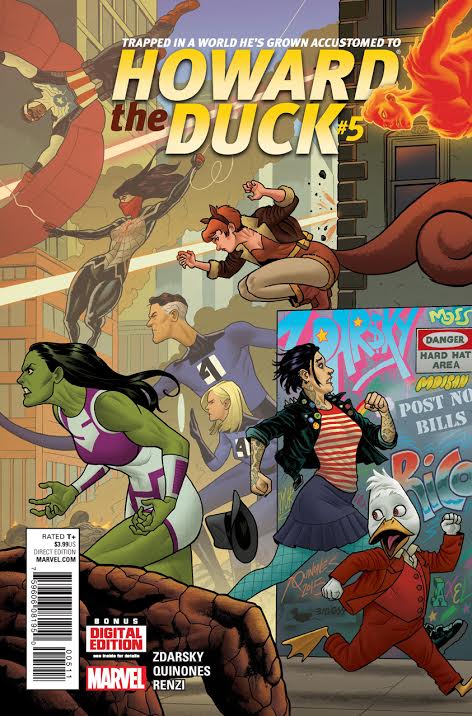 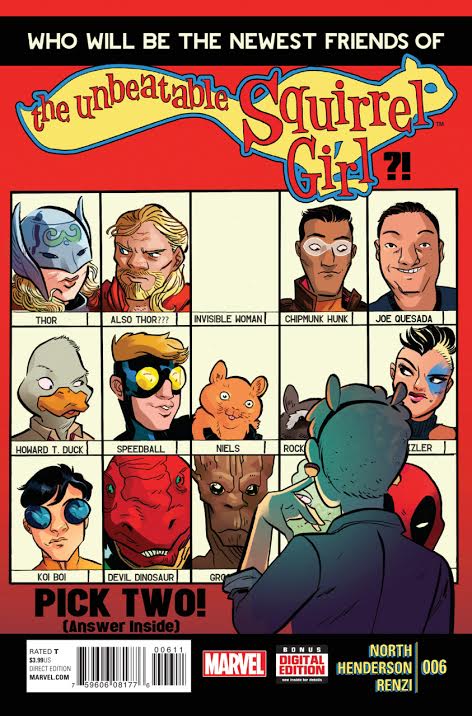 last summer, both ‘The Unbeatable Squirrel Girl’ and ‘Howard The Duck’ were

placed on hiatus, but not before at least the possibility of Howard and Squirrel

Girl crossing paths was teased on the cover of each title. During the summer

hiatus, Chip and Erica collaborated on the critically acclaimed, realistically

depicted reboot of the ‘Jughead’ series for Archie Comics, forging yet another 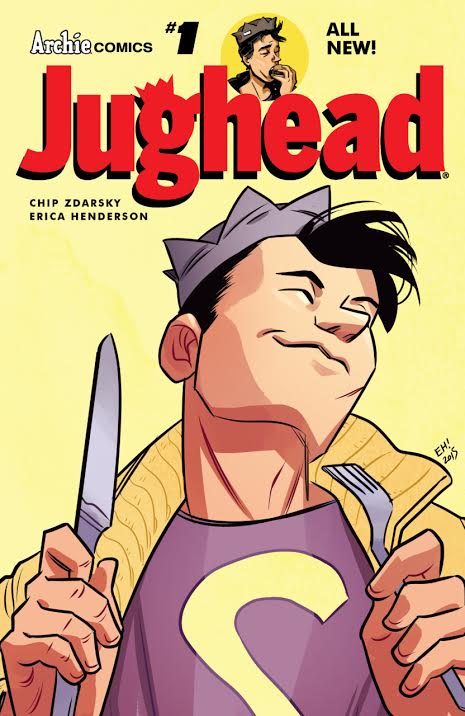 mega-crossover event to date, both of the comedic comic titles were announced

as continuing in the autumn with brand new #1 issues.

Finally the playing field was level, the stage was set and the crossover was

officially announced to the public during New York Comic Con 2015, featuring an

illustration by Erica Henderson of the hapless duo in attendance, cosplaying as

one another while support characters and creative members looked on in

disbelief. Meanwhile, Chip and Joe have wasted no time committing to the

every issue of ‘Howard the Duck’ since, foreshadowing the inevitable reckoning

between the two park-dwelling protagonists.

. . . the most off-beat, unusual and diametrically

opposed characters together in a crossover nobody

knew they needed in their life until now.

So, what exactly can we expect the look of this crossover to be? Well, according 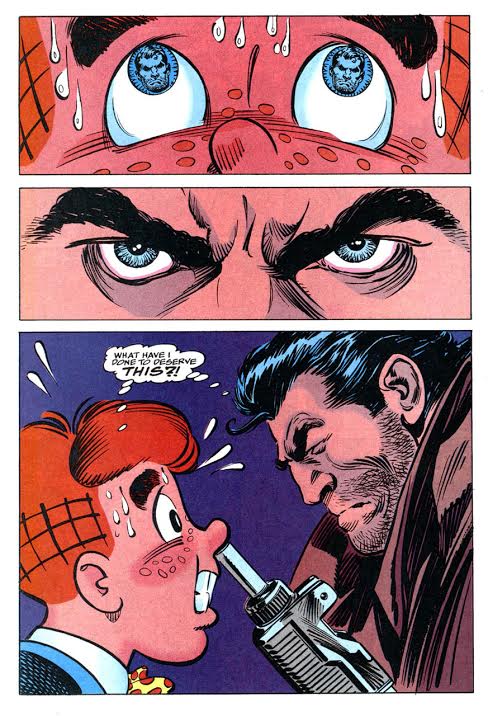 Well, the conceit of the style is that the regular Archie artist did the Archie parts

and John Buscema drew all the Punisher parts. Which is amazing! That’s how we

want to do it with these books. We’ll have a crossover in which Erica does all the

Squirrel Girl drawings and Joe does all the Howard drawings.”

on March 30. Part two, in ‘The Unbeatable Squirrel Girl’ #6, will see release two

This entry was posted in Comics, Episodes. Bookmark the permalink.