From the files of Joseph Thompson:

Not “dog days of summer” hot, but hotter than any day in January had a right to be. I was behind the desk in my office, pouring another 10am bourbon and wondering how I’d fill the bottle again when there was a knock at the door.

“It’s open!” I growled and in walked the sort of dame that’s on a first name basis with a guy I know named Trouble.

Kind of? Not at all, really. I was a “comic” detective. What’s that mean? Truthfully? Whatever I needed it to be. Looking for a Tijuana Bible? I can get it for you. Want to figure out what Flash Gordon or Buck Rogers meant when he laid down that heroic schmaltz in last week’s funny pages? I can help with that. Hell, if you just need a good zinger to roast the bride at your brother’s wedding, I’m your man. But an actual private dick? I could sniff around, maybe piece a puzzle or two together . . . but no, I wasn’t a for real licensed gumshoe.

I gave her the short version of that speech and she said, “I see . . . well then, perhaps you’re the man for this job, after all.”

I’ll admit I was curious why she thought so. “Go on,” I bluffed instead.

“I’ve acquired a number of newsreel filmstrips featuring the female wartime liaison of Captain America and need some help investigating them before they’re sent to theatres.

Cap’s best gal? “You mean Betty Carver? The 107th triage nurse?” I blurted out, tipping my hand that I was already a fan of the radioshow.

“Ugh, not hardly,” snapped back. “I’m referring to the actual SSR Agent who assisted the Living Legend of WWII. Not some dimwitted little twist those radio play hacks dreamed up while knocking back whiskey sours and leering at the waitresses during happy hour.

She looked miffed. I guess I was taking the case, whether I liked it or not. I always was a sucker for a lady that looked that good when she was mad.

“Just review the filmstrips and send me your assessment . . . we’ll work out a standard communiqué protocol after your first assignment.”

“Well, when you sell it like that–” I started to say, meaning to turn her down after all.

“One other thing,” she interjected. “You’ll need to do double duty for the first week, but it should get easier as you go along.” And with that, she dropped two reels on my desk and left the office, promising the rest to be delivered each week at the same time.

Well,” I said to no one in particular, as I looped the first reel to my private projector, “I might as well get this over with.”

Stay tuned for the next exciting chapter! 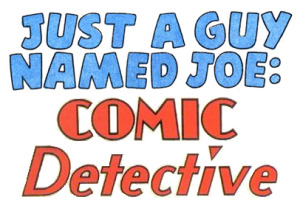