Warning! This review will be fairly detailed and contain multiple spoilers for both “Captain America: The Winter Soldier” and “Marvel’s Agents of S.H.I.E.L.D.”! For the best possible experience, it’s recommended that you not read this review until after you’ve watched the MAOS episode “Shadows.” Enjoy!

We open on 1945. In the closing days of World War II, Agent Carter and the Howling Commandos raid one of the last remaining HYDRA bases in Europe. The facility’s overseer, Herr Rheinhart (Rhinehart?), reluctantly surrenders what we can clearly see is “an object of unknown origin.” During the cleanup, the object is sealed in a metal container and marked “SSR 084.” Other items, including what appears to be the blue “Guest House” alien that drips GH325 are packed and sealed with similar serial #s. Marvel is making a smart move by re-introducing Peggy, Dum Dum and the rest of the gang early on this season in advance of “Agent Carter” this winter. I can’t wait to see more of them.

Flash forward to the present day, S.H.I.E.L.D. agents Hartley, Hunter and Idaho are attempting to purchase information on the 084 we’ve just seen back in 1945 from another S.H.I.E.L.D. agent turned traitor. Unbeknownst to them, they are being shadowed by May, Skye and Triplett, who break cover when an unknown assailant breaks in, kills the turncoat agent and steals the 084 documents. With nothing to show for their efforts, Hartley contacts Director Coulson, revealing they have been working for Phil, albeit without knowledge of the shadow team’s presence. Coulson advises they “go dark” and scrub the mission.

Once both teams return to the “The Playground,” Koenig lets May know that Coulson wants to talk. Trip and yet another agent named Mac are speaking vaguely about what sounds like Agent Simmons, but nothing truly clear is revealed. Meanwhile, Hartley reminisces about Hunter’s cooking while they had been stationed in Budapest. This line feels a lot like a reference to Black Widow and Hawkeye’s very different memories of Budapest in “The Avengers.”

In “The Playground’s” labs, Fitz appears to be staring blankly without comprehension while Simmons tries to prompt and encourage him to take the next step in his scientific process, asking if he can even hear her. Uh-Oh. But it turns out to be a classic S.H.I.E.L.D. misdirect as Fitz pulls out a tiny earpiece and responds in an annoyed tone that he can hear Simmons just fine and knows precisely what to do next before trailing off, losing his train of thought completely. Something we’ll soon learn had been happening with greater frequency since we’d last seen him in Season 1. May stops in and asks how the progress on the cloaking technology Fitz has been struggling with and, with some coaxing from Simmons, Fitz assures May all is going well, just slowly. May offers to stay and help anyway. Feels like a bit of a slight towards Simmons who is Fitz’s usual steadfast companion in all things science-y.

While identifying the unknown assailant as Carl “Crusher” Creel – who had been on S.H.I.E.L.D.’s gifted index, before allegedly being crossed off by John Garrett – it’s quickly surmised that Creel’s death had been staged and he’d been recruited into HYDRA. During this whole exchange, Hunter confesses his interest is purely for financial gain and Hartley states that he’s not a “big picture kind of guy.” Hunter also mentions an ex-wife of his. Is it just me or are S.H.I.E.L.D. agents (who are known for having no family at all) constantly and cryptically referring to family members? What’s up with that? More than we’re being explicitly told, I think.

In yet another part of “The Playground,” Skye is laying on top of a table with the alien hieroglyphics being projected onto it from beneath. As she sits up from contemplating this puzzle, Trip walks in expressing his suspicions about Agent Billy Koenig and his ever-expanding number of brother (it seems Trip, the “Legacy” himself, is wondering the same thing I am, but in a more specific way). Coulson enters and asks for a private moment with Skye, at which point he asks her to downstairs to find out more about Creel. Skye is reluctant and turns eight shades of pale at the thought and, in the following scene, we learn why.

Cut to a quick scene of Koenig showing Skye how to manipulate the controls on a handset before opening the door to “Vault D.” Net, in a scene cut almost whole cloth from “The Silence of the Lambs,” Skye descends a staircase to confront an imprisoned (Ex-)Agent Grant Ward. Ward begins by cataloguing the scars of his suicide attempts and then shows Skye the bruises he’d sustained when he then started running into the walls instead. Skye fires off a retort about how he should have run faster. Sounds to me like the writers are calling back to the mid-credits scene of “Captain America: The Winter Soldier” where Quicksilver is running into his cell’s walls at high speed. Skye doesn’t manage to get much more information about Creel except to confirm their initial suspicions, but then Ward reveals HYDRA’s communication secret using the white noise in the background static of S.H.I.E.L.D. transmissions. Ward assures Skye that the information is true and pledges to her that “so will be every word I say to you for the rest of my life.” He also tries to intrigue Skye with information about her father, but she shuts him out completely using Koenig’s doo-hickey and leaves. It seems I can’t stop making mental parallels to the Marvel Cinematic Universe and “Marvel’s Agents of S.H.I.E.L.D.,” because Ward’s obsession with Skye (which even Coulson confesses to not fully understand) sounds much like Tony Stark’s feeling towards Pepper Potts (“the one thing I can’t live without . . . and that’s you”).

In a Washington D.C. area scene, we then see the recently promoted Brigadier General Glenn Talbot taking a stroll with his family when Agent Triplett shows off his reverse pickpocketing skills by slipping a cell phone into Talbot’s pocket. Coulson calls and tries to warn Talbot of Creel’s intentions, but at that moment Crusher attacks. In the ensuing melee with Talbot, his covert operatives and a swashbuckling Melinda May who swoops in to the rescue, Creel grabs an ornate chain and fencepost top to sport his signature ball and chain look while absorbing and transforming his arm into solid brass. Nice.

May bugs out while Talbot’s men subdue Creel and take him into custody, but not for long because as Talbot is hustled to a private car, he’s intercepted yet again, by the one-woman-army who detests being referred to as “The Cavalry.”

So far this season has a soldier-of-fortune-on-the-run like “The A-Team,” as opposed to most of last season’s “X-Files” creature of the week format. Feels like a step in the right direction to me.

The A-Team had their constantly pursuing Colonel Dekker and S.H.I.E.L.D. has Glenn Talbot. Who, as he banters back and forth with Coulson while strapped to a chair, confesses a grudging respect for Coulson’s crew (probably more than Hannibal ever got from Dekker), admiring their ability to avoid capture all winter. This line struck me, as well. First, “Marvel’s Agents of S.H.I.E.L.D.” had been confirmed as taking place in real time in conjunction with the Phase 2 Marvel Cinematic Universe movies thus far, but the time since Coulson and Talbot faced off at “Providence” amounts to a full summer, not winter. Still, when it comes to S.H.I.E.L.D. and the U.S. military complex, you never can tell what’s being deliberately encrypted. Plus, the line feels like a pretty clear reference not only to “Captain America: The Winter Soldier,” but also the snowy wastes of the Canadian wilderness where “Providence” was located. Coulson the calls out Talbot’s blind spot and informs him that Creel allowed himself to be captured so he could infiltrate Talbot’s base and get his hands on the 084. It’s really not surprising that Coulson saw this development right away, after all, Loki pulled the same stunt on the Helicarrier in “The Avengers.”

Geez, why is Fitz the only one who even speaks to Simmons, let alone look at her? What’s everybody else’s problem?

Speaking of “infiltrating Talbot’s base,” here comes Trip dressed to the nines as “General Jones.” Seems like the writers REALLY want us to believe Howling Commando Gabe Jones is Triplett’s granddad. Maybe, but personally, I think it’s another misdirect. It’s likely we won’t get any real answers about that until “Agent Carter” premieres early next year, though.

After a hilarious moment where Coulson (digitally modified to sound like Talbot) chews out a low-ranking gate grunt and then invites him to shake his hand the next time he sees Talbot (I can’t wait for the set up to that gag to pay off!), May and Skye drop pretty heavy hints that the 084 isn’t the only thing on the team’s checklist. This calls to mind Black Widow’s “compartmentalized” mission on the Lemurian Star in “Captain America: The Winter Soldier.” Meanwhile, the “Silence of the Lambs” homages hit high gear as Creel breaks out of his Lecter-style glass cage and then shortly after stalks the S.H.I.E.L.D. team in the dark, like Buffalo Bill did to Clarice Starling before Hartley discovers the 084, foolishly grabs it to try and get the upper hand on Creel only to have that hand frizzle-fried on the spot instead. Ouch. That’s gotta smart. Creel takes off and the rest while the rest of the S.H.I.E.L.D. gang rush to Hartley’s aid. Skye immediately notices the same hieroglyphics on the 084 that Coulson scratched out last season. Coulson tells them to continue the rest of their mission, but Hunter’s had enough and grabs Hartley and boogies. They reach Idaho who’s been idling the getaway Tahoe “General Jones” arrived in (which looks exactly like Fury’s Tahoe . . . right down to the Virginia plates) and they flee. Hartley tells Hunter to amputate her arm before the 084 still clamped in her hand kills her.

Back at Talbot’s base, May, Skye and Trip grab a cloakable Quinjet and in a flash of activating retro-reflective panels, they scram as Coulson finally voice-over explains the secondary mission. Get that cloak tech because Fitz is getting nowhere and had has appeared to become less and less stable since Simmons left several months ago. So . . . it looks like Fitz is far worse off than it has appeared up to now. Or is he? On the surface, it looks like Fitz might be hallucinating Simmons’ presence as a coping mechanism in his severely reduced mental state, but what if they really are in contact with one another? They did try to set up an encrypted secure line between each other last season. There have been so many fake-outs during this episode anything is possible at this point.

In a finishing move that puts “Mortal Kombat” to shame, Creel attacks the fleeing Tahoe in a sequence which, sure enough, is nearly a perfect mirroring of Bucky’s first attack on Fury in “Captain America: The Winter Soldier.” Hunter looks like he’s in a bad way and as we’re left wondering if Hartley and Idaho are really dead, Crusher Creel rubberizes his hand with one of the flipped Tahoe’s tires and absconds with the 084, leaving Hartley’s severed, scorched and scarred arm behind.

In the end tag scene, which closely resembles the mid credits scene from “Captain America: The Winter Soldier,” Herr Rheinhart (now going by Doctor Whitehall and not appearing to have aged at all in the last seventy years) gives the 084 a name of it’s own, referring to it as “The Obelisk.”

Lots to process in this first episode of the second season of “Marvel’s Agents of S.H.I.E.L.D.,” but I think the biggest question is what has Simmons been up to if she hasn’t been at Fitz’s side all this time? Here’s hoping we’ll learn more next week! 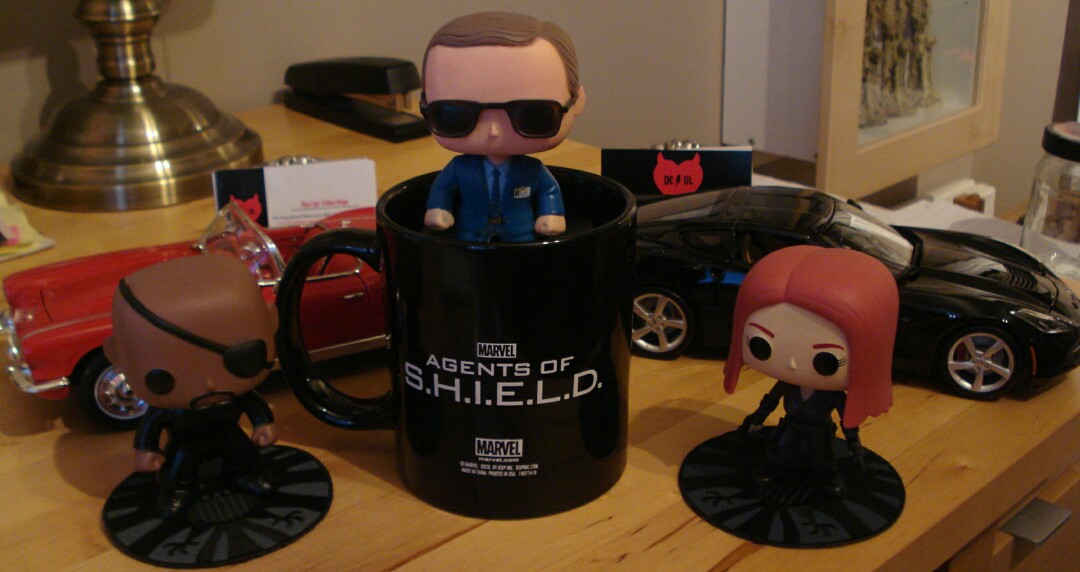